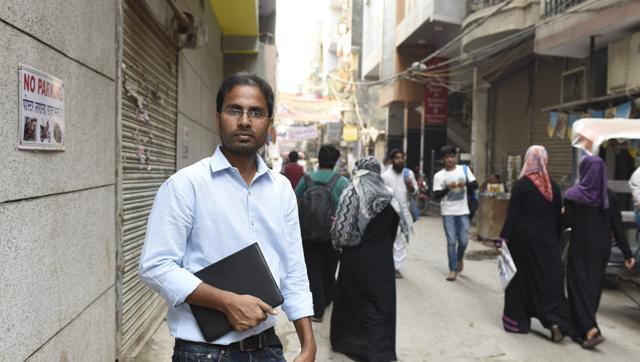 New Delhi : Good intentions turned Afroz Sahil, a Jamia Millia Islamia student, into a journalist. His experience made him a proprietor.

Sahil, who runs Beyond Headlines, an alternative media collective at Batla House, Delhi, says the shadow-boxing that happens inside mainline newsrooms left him with little choice but to leave his job.

Sahil’s job as a RTI specialist with a news website led him to discover a Rs 790-crore scam in Haj subsidies in 2012. “Seniors told me ‘forget it, it’s a religious issue.’” Another RTI revealed that Baba Ramdev had funded the BJP before the 2009 elections. “‘Rs 11 lakh is not that big an amount’ I was told.”

Eventually, he quit. Sahil’s decision to run his own website with news on minorities, women, farmers and the socially backward, are a common man’s taking control of the news space, and running with it. “Our news is read by those in Delhi and Champaran,” says the young Bihari with a hint of pride. But there has been a price to pay.

To keep his website running, he jobs for another website. Afroz Sahil, the co-editor of Beyond Headlines is the “naukar” (servant) of TwoCircles.net, he says self-deprecatingly.

There are other travails. “Stories picked up from Beyond Headlines website have, at times, been run on big media as their exclusives,” he says. He does get credit, but as a resource person, who gives a bite for a story he himself has first published. “I get quoted as an activist quite a lot,” he says. Even though he has gone blue in the face saying that he is not one.

The saving grace, he says, is the contribution he is able to make in the field of real news, for which he has a ready description: “What is easily available is a press release. What powerful people are trying to hide is news….”

The proliferation of alternative journalism in India has happened, say experts, in the past five years with an attack on fundamental freedoms and a realisation that a space for uncensored information had to be created at personal cost as it were. Sahil has skipped meals so as not to eat into funds meant to keep the site running.

Most of the people who contribute to Raiot, loosely associated with Thma U Rangli Juki, a progressive political organisation of Meghalaya, for instance, come from a background of actual participation in what they write about. A member of the collective may be addressing a protest while a second member may be shooting its video. But there is always more work than there are hands to do it.

“The lack of a counter-narrative on many of the events that rocked 21st century India such as the Gujarat riots, the Parliament attack and workers’ struggles, and the rise of a new and alternative model of journalism are closely linked,” says sociologist Ravi Kumar who teaches at South Asian University, Delhi.

Being ‘alternative’ comes with its own work pressures: the daily hustle of presenting news at an angle from the mainstream, the job of keeping up the commentary in periods of lull, and most of all, to change the perception and processes of news-making

Kumar Sundaram, an anti-nuclear leftist disarmament researcher, who co-edits India Resists (IR) out of a room lent by an NGO in Delhi, says the core team of five curates news and campaigns about a variety of movements in a way that “the mainstream can’t. Or hasn’t.”

How so? “The coverage of the Kudankulam and Jaitapur movements made us realise that news about movements should be curated in an alternative space to show how the grassroots organises itself,” says Sundaram. “Instead what we read were cost-benefit analysis of nuclear power or the ‘money question’ — hinting that our campaigns are foreign-funded. Mainstream parties need money to organise their rallies. It is not money that make people protest. Ordinary people do protest in order to protect their lives and livelihood. A group of women meeting in a church can become a collective. You won’t get these textures by number crunching.”

Does the team face a fund crunch? “We have no funds and are not looking for any. It takes time to run a website, it doesn’t require too much money,” says Sundaram. “The average running cost in a year is Rs 40,000.”

The pull of these sites have been in the organisation of their content. What the mainstream may put in their inside pages, alternative media puts up front. Tarun Bhartiya, a Raiot member, considers these its “top posts:” ‘Reports from a prison camp called Hyderabad Central University,’ ‘Shillong Sex Tapes Saga’ and ‘Lost your Honour Modi ji – A Bhojpuri Song analysing the BJP defeat in Bihar.’

Work culture in most alternative media websites is informal. There is no tight editorial control and disagreements are common. “Tarun and I often fight over many things, which I consider reactionary and he revolutionary.… We fight often but I think it brings out a lot of material to the surface,” says writer Avner Pariat another member of the Raiot collective.

Similarly, there is no one Kafila position. “I am free to disagree with people I may generally agree with,” says Shuddhabrata Sengupta, a member of the collective. During the Anna Hazare agitation, he wrote a post critical of the movement as he felt the first draft of their formulation of the Lok Pal Bill was undemocratic. “Others in the group wrote posts criticising my position.”

The freedom to disagree within the group and put these disagreements out in the form of articles has not protected Kafila from other criticisms, at times by fellow-travellers. Sengupta lists them himself: “We get called anti-national from the right, which is expected. Mainstream Left calls us anarchist. Some websites call us brahminical. While others who are not comfortable with Dalit politics, take us to task for the posts that speak from a Dalit position. All this is readable on our Comments section. It’s good for us to hear all this. No one site can or should represent everyone.”

These sites also collaborate in putting up content, even of those with whose politics they feel is important but whose position they may not share. Kafila and Raiot may decide to post an article together. IR may post Round Table India’s content. “But we don’t just copy paste, by commenting and forwarding their links, we show support,” says Prerna Gupta, an IR co-editor.

Some of the most trenchant criticism of alternative media sites has, in fact, come from RTI, a Dalit Bahujan socio-political online platform that began in 2009 with the maturing Bahujan movement as its backdrop. RTI has neither tried to be ‘media’ nor its ‘alternative’ even as it is a point of reference in discussions and interventions in the world of alternative media.

“RTI’s aim is to help in the building of an ‘informed Ambedkar age’ to build a Bahujan civil society,” says Kuffir, contributing editor, RTI. “That is also the key difference between us and all Brahminised sites – whether they call they call themselves ‘mainstream’ or ‘alternative’: they wish to ‘cover’ caste issues. We believe we talk of the mainstream — the Dalit, Bahujan, Adivasi majority of India….”

Some alternative media sites, in fact, have no quarrel with big media. Sengupta is appreciative of the traffic between the two. “There is virtue in different time cycles. People would say the magazine will kill the newspaper or vice-versa, doesn’t happen that way…. If you do your job, it helps us do ours.”

Raiot stories have been followed up by mainstream journalists. What Raiot is after, is to make the Northeast the centre of stimulating conversations, without letting go of opportunities for satire. The site posts songs celebrating alcohol. Once in a while there are sermons by pastor Kyrsoibor Pyrtuh, another member.

Is there any topic that is off limits for Raiot? “Are you asking if we have holy cows?” asks Bhartiya. “Check the site. We have published some really great beef recipes.”

Be the first to comment on "Alternative media’s changing rules of the game, but is it enough?"